Exceeded expectations after one year of biogas production at Nymölla mill

In 2021, the Multicopy production base in Nymölla mill took a step further in the fossil free journey, with Stora Enso entering a partnership with energy company Gasum. We had a talk with Erik Woode, Director, Project Development & Execution, at Gasum, to get a status update after almost one year of turning residue water from production into fossil free fuel.

Despite an unpredictable start with the pandemic causing a few delays in the inauguration process, the present and the future of Nymölla mill as a liquefied biogas generator look bright:

– Even though we haven’t been able to be operative for as long as we had planned, the first indications from the past year are that we are producing more biogas than we expected, Woode says.

The prediction was to produce 75-80 GWh per year, but Woode dares to predict an even higher number for the future:

The number one benefit of liquefied biogas (LBG) is that it’s a fossil free alternative fuel, that derives completely from organic material. In that way, it contributes to the current conversion to a world run on nothing but fossil free and renewable energy.

Furthermore, Woode explains, it’s a flexible fuel in the sense that it’s here and now. We can use it as it is in trucks, for ship transport and for industrial purposes – without any need for battery storage for example, as needed for electric fuel.

And there’s more to it:

– As long as we have industries, we will have streams of residue that we have to take care of in a responsible manner. Liquefied biogas is, in my opinion, the best possible way of making use of residue from production, Woode says.

Over the past years, replacing fossil energy has been a hot topic, and political decisions on biogas production are getting stricter – which makes Gasum and Stora Enso central players, with the possibilities to contribute to something good.

– Today, renewable energy is coming up on the agenda in a way that it has never been before. But Sora Enso began their plans with the Nymölla project several years ago, which makes them ahead of their time. Nymölla is definitely the largest biogas plant in Sweden linked to the pulp industry, Woode says.

– We have a fantastic collaboration with Stora Enso. There has been a strong interest from the beginning from both sides to really make this work. The evolvement ahead for biogas production looks bright in all industries that produce organic residue, such as the paper mass industry.

This is how we do it

1. It all starts with a tree growing in a sustainably managed forest.

2. Our wood is mainly sourced within a 100km radius and taken to Nymölla mill.

3. In the process of turning wood into premium office paper, water is gradually removed in both the pulp and paper making process.

4. A stream of residue water is pumped into a reactor where biogas is produced after organic materials are broken down by bacteria in an oxygen-free environment – a process called anaerobic digestion. The biogas is then cooled down to minus 160C and turned into liquefied biogas.

5. The LBG is stored in an insulated tank before it’s pumped to trailers and transported to gas stations where it’s used to fuel heavy-duty vehicles.

6. By using LBG instead of diesel, the greenhouse gas emissions can be reduced by up to 90%. 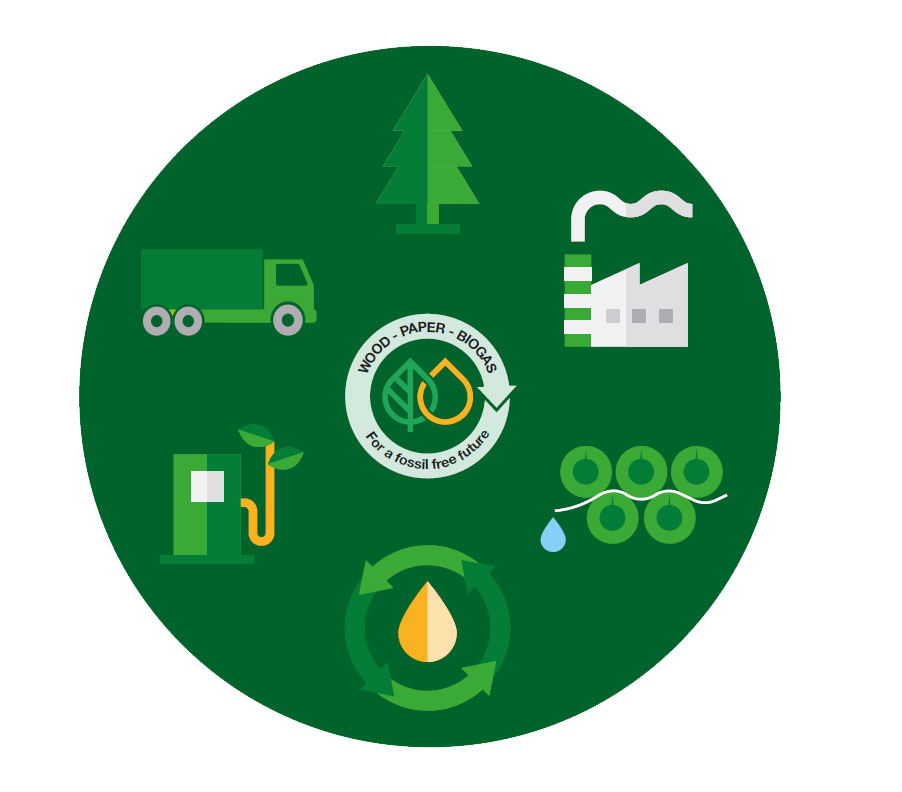 Exceeded expectations after one year of biogas production at Nymölla mill

In 2021, the Multicopy production base in Nymölla mill took a step further in the fossil free journey, with Stora Enso entering a partnership with energy company Gasum. We had a talk with Erik Woode, Director, Project Development & Execution, at Gasum, to get a status update after one year of turning residue water from production into fossil free fuel.

3 reasons to read on paper this summer

Summer is approaching. Time to let minutes become hours in a hammock or on the beach. But what type of reading should you bring? The traditional paper book or the lighter digital alternative? Here’s why you should consider dragging with you the heavy stuff.

We’re thrilled to finally share that our Multicopy media portal, where you can visit our webshop and download all kinds of Multicopy media material, has been updated with a fresh, modern look and a smooth user-friendly design.